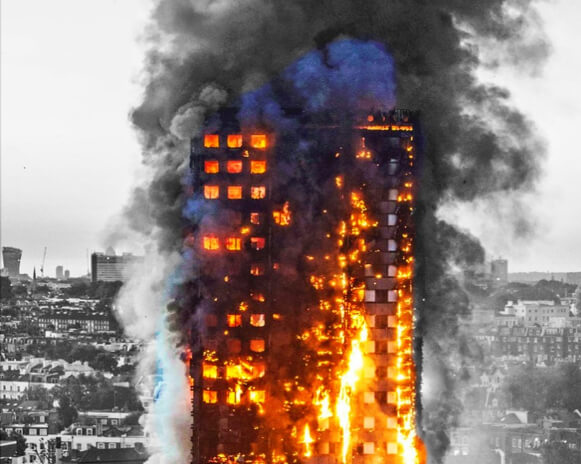 In 2017 Aamer Anwar was interviewed on RT UK following the announcement of a Public Inquiry into Grenfell Tower fire and condemned the ‘whitewash’ that was beginning.

Sadly much of what he said then has turned out to be true, as the first stage of the inquiry is published on the 30th October 2019.

The leaks from the inquiry are a grotesque attempt to scapegoat the firefighters who risked their lives running into Grenfell Tower that night, are still affected by what they saw and the lives they were unable to save.

The firefighters and the people of Grenfell were the true heroes, whilst a Tory Council and Government valued making cuts rather than protecting life.

Firefighters were not responsible for people dying in Grenfell Tower, it was the systematic cuts in our fire service, the de-regulation of fire and safety regulations, the failure to implement review following several fatal fires, all whilst wrecking a highly respected, professional public service.

Never forget that since 2010 we have seen 20% of firefighters slashed and 10,000 fewer firefighters on duty. When Boris Johnson was the Mayor he axed 552 firefighters were axed and shut down 10 fire stations – this is the impact of Tory cuts.

It would have only cost £300,000 to have fitted sprinklers in Grenfell which would have saved lives. £4000 would have meant a fire extinguisher on every floor. Fire alarms were not working and could not be heard that night.

Yet £3 million was spent on cladding the building in flammable plastic for the gentrification of the area, who ordered that? People living in that building had been saying for years that it would take a catastrophe for something to change.
72 People died in Grenfell Tower because they were poor, that is a disgrace in the 21st Century and people should go to prison for that.