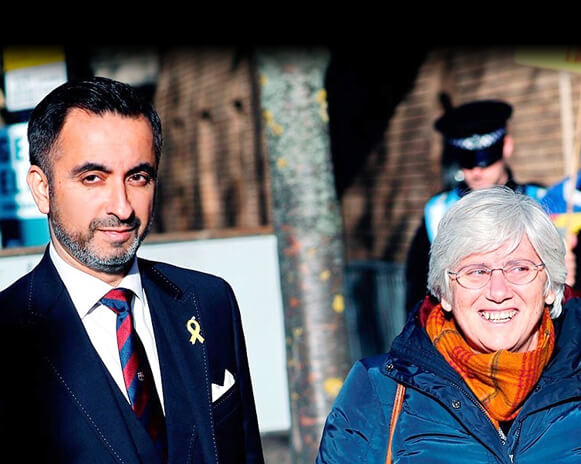 Statement on behalf of Professor Clara Ponsati by her solicitor Aamer Anwar.

This morning I arranged with Police Scotland for the voluntary attendance of Professor Clara Ponsati. She was formally placed under arrest and the European Arrest Warrant served on her.

Clara was then transferred to Edinburgh Sheriff Court for appearance at the Extradition Court before Sheriff Ross. After submissions from our legal team, Clara was released on bail.

The next hearing will take place on the 12th December and a date for the full hearing is likely to take place in Spring 2020.

Clara Ponsati faces a single charge of ‘sedition’ which relates to the organising of the referendum in her role as the Minister for Education.

The warrant is full of contradictions and mistakes, whilst it accuses Clara of everything, in reality the warrant provides no real examples of any alleged crime.

This warrant comes as no surprise, because when the Supreme Court sentenced 9 Catalan leaders to 100 years between them it wrongly accused Employment minister Dolors Bassa of the decisions taken by Clara in her role as Education Minister.

Clara submits that she should not be extradited for a ‘show trial’ in the Supreme Court, where she believes the only verdict would be one of guilt.

Clara views these charges as a ‘politically motivated prosecution’.

We will submit that Clara’s human rights cannot be guaranteed in the Spanish Courts.

The warrant signed by Judge Pablo Llarena of the Spanish Supreme Court charges Clara Ponsati with the crime of sedition.

Sedition is the archaic offence invented in the 16th century Courts of Europe, by Kings and Queens who feared a backlash from people demanding their freedom.

Sadly for Spain, in Scotland like most democracies, the crime of sedition no longer exists.

The Spanish authorities have repeatedly abused the European Arrest Warrant.

We are instructed by Clara to robustly defend her from what she describes as ‘judicially motivated revenge’. We have a long road ahead and are taking on the Spanish authorities with all their resources.

Clara wishes to put on notice all those Spanish politicians who have abused the rule of law that they will also be exposed to scrutiny in her defence.

Clara trusts that her fate now lies in the hands of the Scottish justice system which she believes to be impartial, robust and independent.

President Sanchez recently exposed himself to accusations of interference in the extradition process whilst the leader of the far-right Vox party believes Scotland should face consequences if Clara is not extradited.

Our legal system will not be swayed by such interference or threats and will come to a decision based on the law.

Clara believes that the Catalan people are changing the course of their history and that each act of repression by Spain brings the day that Catalonia is free closer.

We have won the battle but not the war, Clara is taking on the Spanish state and she requests your support so please donate what you can and share the link for the legal crowdfunder: