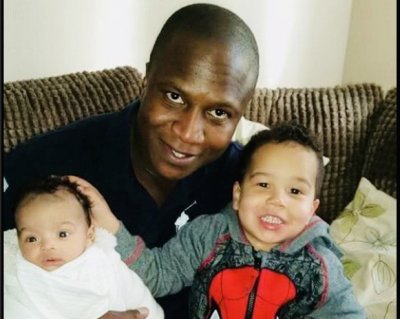 My name is Aamer Anwar and I am the solicitor for the Sheku Bayoh family, present with me at the top table are Sheku’s sisters Kadijato Johnson, Adama Jalloh, Kosna Bayo, Sheku’s brother in law Ade Johnson and also Sheku’s mother -Aminata Bayoh. I am making this statement on their behalf and Collette Bell Sheku’s partner and the mother of his youngest child Isaac.

Following this statement the family will go outside to meet with those attending for the vigil. At 9.30am they will go into the Inquiry building.

The statement is as follows:

“7 years and 7 days after Sheku Bayoh met his death in police custody, the public inquiry will begin later this morning, Sheku’s family will pay tribute to a much loved son, brother, uncle, friend, partner to Collette and father to his 2 boys Tyler and Isaac.

This public inquiry would never happened, had it not been for the courage and perseverance of Sheku’s loved ones who have refused to walk away, to be silenced, bullied or patronised.

This Inquiry is testament to their desire to seek the truth and ensure Sheku is never forgotten.

Over the years it has become clear to the family, that the Police, PIRC and Crown Office has operated an unholy trinity of dishonesty, racism and incompetence, betraying the word justice.

Kadi Johnson, has no doubt that the way Sheku or her family were treated by the justice system would not have happened had Sheku been white, their treatment was compounded by repeated attacks from those who remain in a ‘child-like’ denial about the existence of racism in policing today.

Kadi has described Sheku as Scotland’s George Floyd, but ‘Taking the knee’ and ‘Black Lives Matter’ will mean nothing, if Scotland fails to support justice for Sheku.

When the police arrived Sheku was unarmed, he had no knife, nor was one ever found on him- yet he was the one who was instantly met with CS spray, Pava spray and batons.

In less than 50 seconds of the first police officers arriving Sheku Bayoh was brought to the ground, he was handcuffed and restrained with leg and ankle cuffs, and would never get up again, losing consciousness and dying.

As Kadi said when they put her brother’s lifeless body in the ambulance he was still shackled like a slave, with over 24 separate injuries, cuts, lacerations, bruises and a broken rib.

Within minutes the process of criminalising, smearing and stereotyping began to enforce an image of ‘mad’ and ‘dangerous’ black man, wielding a knife and with stereotypical characteristics of extraordinary strength in an attempt to blame the Sheku for his own death, but he was unarmed and never deserved to die.

Sheku was only 5ft 10inches weighing 12 stones 10 pounds, that is 80 kg, but the officers involved in restraining him on the ground weighed around a total of 100 stones, i.e. 636kg

Those officers on their return to Kirkcaldy Police Office, were allowed to sit in one room together for several hours, whilst they refused to provide statements to the Police Investigations & Review Commissioner- the PIRC. and failed to do so for 32 days.

The family placed their trust in the PIRC’s investigation and for the Crown Office to deliver justice, but that trust was betrayed when five years later they were told by the Lord Advocate that not a single officer, nor Police Scotland would face charges, despite the evidence they had seen.

Police Officers had requested undertakings that evidence they gave in this Inquiry would not be used against them in any future prosecution- this was refused by the Solicitor General.

There should be no impunity for those found to be involved in any criminality, misconduct or impropriety.

As for the nine officers- Retired PC Alan Paton, Retired PC Nicole Short, PCs Ashley Tomlinson, Craig Walker, Daniel Gibson, Kayleigh Good, Sgt Scott Maxwell, James McDonough, Alan Smith.
The family say if these officers have nothing to hide, then they have nothing to fear from coming and giving full and frank testimony to the Inquiry.
Sheku Bayoh’s family have waited a very long time to hear the truth and that is the very least they are entitled to.
We are always told that justice is colour blind, but this Inquiry must not be blind to the issue of colour, because although Sheku was unarmed, his family believe his skin colour was treated as a weapon as he met overwhelming force.

Sheku’s loved ones demand that this Public Inquiry delivers the truth, is fearless and impartial.

But in the end the real test of this inquiry will not be the sympathy expressed for a family who have conducted themselves throughout with utmost dignity, but whether this country acts to ensure that real change takes place in an unaccountable, all powerful justice system.

This inquiry must be prepared to go where no inquiry has gone before.
Whilst for some it has been easy to scapegoat Police Scotland, for the family the ultimate betrayal was at the hands of the PIRC and Crown Office.

I want to conclude by saying Sheku’s mother Aminata wants people to think of her only son not as a man who died following a struggle with the police.

She wants people to remember him as a bright young man who any parent would have been proud of.

He was a wonderful son, wonderful brother, uncle, friend and loving partner to Collette, and a shining example of what any child would want in a father.

Sadly, Sheku is not by any means the first man to die in police custody but if anything I hope that his name does not fade from memory and that one day the name of Sheku leaves us a legacy that his children can be proud of.”