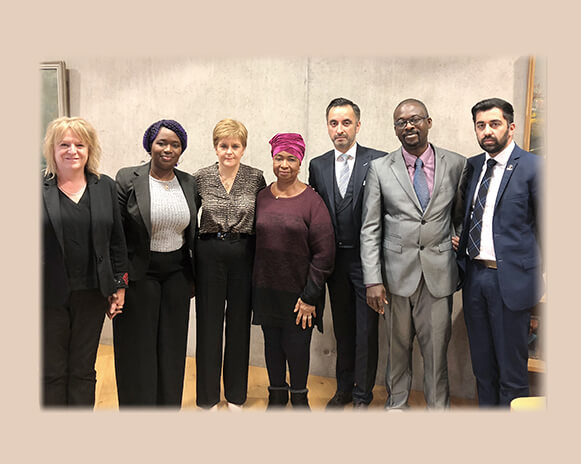 Following the decision not to prosecute any police officer and/or Police Scotland for the death in police custody of Sheku Bayoh on the 3rd May 2015, the Bayoh family and their lawyer Aamer Anwar, along with Deborah Coles of Inquest met at 12pm today with the First Minister Nicola Sturgeon and Cabinet Secretary for Justice Humza Yousaf. 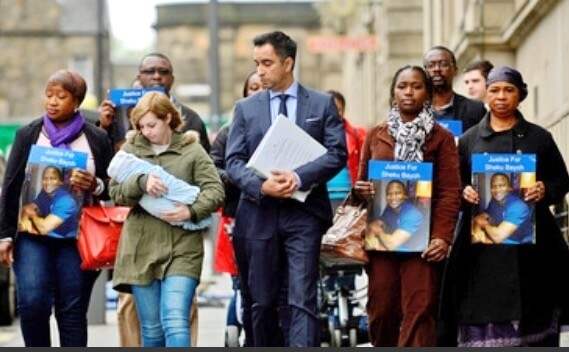 Statement by Aamer Anwar – Solicitor for family of Sheku Bayoh

“Yesterday the Lord Advocate stood accused of betraying justice and Sheku’s family stated they no longer had any confidence in the Lord Advocate to deal with the wider issues raised by the death in a Fatal Accident Inquiry.

Time and time again the FAI system has been exposed for failing to act in the best interests of the families of those who die in state custody, whilst failing also to hold to account ‘agents of the state’.

The FAI system lacks the remit to deal with serious public concerns, wider issues of deaths in police custody, use of restraint techniques, allegations of racism, lack of police accountability, the role of the Police Federation, the failure to stop conferring/collusion in post incident management, the insufficient powers of the PIRC and their institutional bias and incompetence, the failures by Crown Office and the length of time taken to investigate, nor would the findings of an FAI be binding on Police Scotland.

The Family and their lawyers met with the First Minister and the Cabinet Secretary for Justice today at the Scottish Parliament and requested the Scottish Government to consider the holding of a public inquiry under the Inquiries Act 2005, led by a High Court Judge with a robust and experienced panel of special advisers. The family advised of the issues they wished to be considered, requested core participant status and to be consulted on the terms of reference.

To say that a Public Inquiry must leave no stone unturned is an essential starting point. There must be publicly accountable learning. As with events like Hillsborough or the inquiries into the killing of Stephen Lawrence, Zahid Mubarek or Hillsborough it is necessary in terms of public confidence and justice going forward for the various chapters of the inquiry to cover both the cause and the wider circumstances that contributed to the death and what recommendations can be made to avoid repetition and the safeguarding of lives in the future.

From that, it follows that the Inquiry must identify each and every individual and organisation who must bear responsibility and accountability for this tragedy and the mishandling of the aftermath.

Clearly this requires an investigation of the acts and omissions that contributed to immediate causes and underlying circumstances.

Any statement made by the Scottish Government will quite rightly be cautious about promising too much or unfairly inducing expectations that an Inquiry might not be able to deliver.

However, to express guiding principles that recognize the loss that has occurred and the healing contribution that a process of public accountable learning could make, is not a false promise or an illegitimate or undeliverable expectation.

We also believe that the Inquiry must focus on whether institutional racism, discrimination, inequality and cultural attitudes were responsible for what occurred: to what extent did the life of Sheku Bayoh not count, or could have counted more? These concerns are inescapable as far as many of the core participants are concerned.

To leave them out would be to ignore potential social and institutional causes of the restraint and Death of Sheku Bayoh and the shortcomings of the response to it. We would therefore suggest that they form a recognized part of the Terms of Reference.

In conclusion the Bayoh family welcome the First Minister and the Cabinet Secretary for keeping their promises to meet with them and taking on board their concerns. Following yesterday’s devastating news, today’s announcement by Humza Yousaf in the setting up of a Public Inquiry is a critical moment for Scottish justice, the rule of law and important step forward in the family’s campaign to establish accountability.

The family are deeply grateful to the Scottish Government for their announcement of a Public Inquiry. This is an important first step in holding power to account and establishing the truth, because without truth there can be no justice.”

“This is a welcome decision and shows the Scottish government recognise the serious issues raised by Sheku’s death. It is also in both the family and public interest. This inquiry must have the family voice at its heart, a terms of reference that can scrutinise the systemic issues raised and a robust and diverse panel. Those entrusted with the role of policing must be subject to accountability before the law. This inquiry can help examine concerns about racial injustice and the way custody deaths are investigated in the hope that future deaths are prevented. Today is a positive step in the family’s search for truth and accountability.”