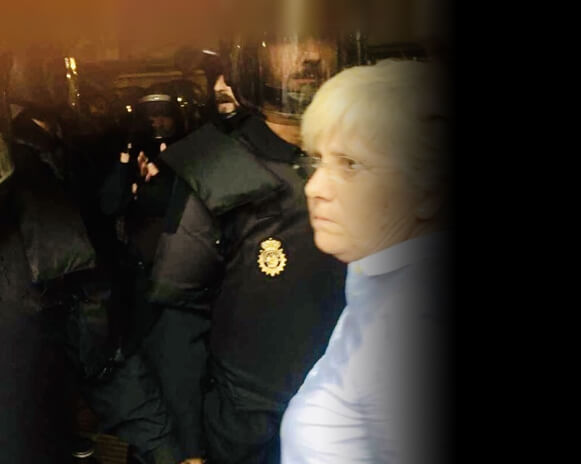 Statement on behalf of Professor Clara Ponsati by her extradition lawyer Aamer Anwar.

She will be detained and arrested and transferred to Edinburgh Sheriff Court, 27 Chambers St, Edinburgh EH1 1LB for a hearing at 2.00pm, where her legal team will apply for bail.

The process is expected to be completed by 3pm. Following which a full statement will be issued outside court.

Following the sentencing of the nine Catalan political prisoners to a total of 100 years, a new European Arrest Warrant has been executed by Spain for Professor Clara Ponsati for the crime of ‘Sedition’ relating to her involvement in the peaceful independence referendum of 2017.

That warrant which we maintain is full of contradictions, is ‘rambling’ and unable to explain what criminal offences the Spanish Supreme Court accuses Clara, has, however, following ‘clarification’ from Judge Llarena finally been accepted by the UK authorities for execution.

WHAT CHARGES DOES CLARA NOW FACE?

Clara faces the charge of ‘sedition’, which she utterly refutes. If extradited and convicted Clara could face a sentence of up to 15 years. This warrant is viewed as yet another example of ‘judicially motivated’ revenge. It is our intention to argue that can be no guarantee of a right to a fair trial in Spain, where most members of the Catalan Government are already in prison or exile.

If Clara were to be returned to Spain, then it is believed that she would be subjected to a ‘Show Trial’ where the only possible verdict could be one of guilty. We will submit evidence to show that her extradition would be unjust and incompatible with her human rights.

It is not a crime to vote for independence, and the extradition will be opposed robustly. It is Clara’s intention to put on trial the Spanish Justice System as well to consider citing those politicians who have interfered with due process.

Clara is once again taking on the might of the Spanish state and remains resolute and determined to fight and believes Spain will never be able to crush the spirit of the Catalan People.”