Following Pedro Sanchez’s victory in Spain, my message from the Diada remains the same.

Last year on September 11th, I spoke at the Diada in Barcelona as Catalans awaited the ‘show trials’ of Spain’s political prisoners to begin.

This year Sanchez won the Spanish election, but so did those supporting independence in Catalonia.

Exiles- former minister Clara Ponsati, President Carles Puigdemont and Tony Comin were to stand in the European Elections, but scared of the prospect of yet more victories, Spain’s Central Electoral Board have prevented them from standing.

The ruling has been opposed and makes no sense, after all Puigdemont was allowed to stand as President in the Catalan election of December 2017.

The fact remains that of the 12 Catalan leaders on trial not one has been convicted yet, nor have those in exile. In fact Spain withdrew the European Arrest Warrants against the exiles, on the eve of Clara going to court in Scotland and after a humiliating defeat in Germany’s courts over Puigdemont.

Spain’s electoral law has once again been breached- why was the ex-cultural minister Lluis Puig allowed to stand as a candidate two weeks ago for the Spanish Senate?  How is Clara Ponsati able to close Jordi Graupera’s electoral list for Barcelona?

How bizarre that a Republican political prisoner can win the general elections in Catalonia, four political prisoners can be elected as deputies in the Spanish Parliament and then the very next day Spain vetoes the exiles.

So it would appear nothing has changed, or rather things have got worse. 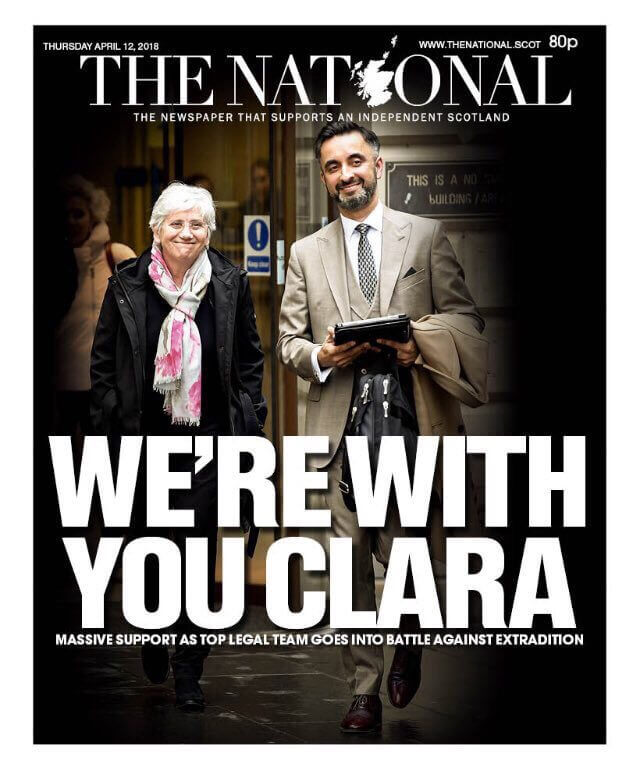 My words spoken at the Diada are as relevant today and I repeat some of them here:-

“General Franco would be so proud of modern Spain acting more like his Fascist dictatorship- proud of the actions of Rajoy, the Judges, the thugs in uniform and of course now that so called socialist Pedro Sanchez.

To Catalonia I say you have the mandate, the ideas, the dreams, people power and you are on the right side of history.

The right to self-determination is a fundamental human right and after more than 300 years of oppression, Spain cannot and will not crush the aspirations of Catalonia.

You have conducted your struggle with dignity, discipline and passion, your freedom is tied to our freedom.

Spain labels you as terrorists but whoever stands for justice and peacefully fights for freedom cannot be called a terrorist.

Your struggle is a just cause; Freedom is your cause and you do not walk alone.

Prime Minister Pedro Sanchez said he wants a political solution rather than a judicial solution.

I would ask Sanchez if a gangster walked into his house, took his children hostage, held a gun to their heads and then asked him as a father to negotiate with the gangster.

Is that a peaceful resolution or is that blackmail, is that negotiation or is it terrorism?

If Sanchez is truly interested in a political solution then free all political prisoners without condition and allow Clara Ponsati and the political exiles to return home.”

So today nothing has changed other than the ‘show trials’ have commenced and Spain stands accused of politically motivated prosecutions driven by vengeance and a total contempt and lack of respect for international law and human rights.”

Catalonia never be scared to raise your voice for the truth, one day you will be free.