My column published in Scottish Sun on Sunday 11th May 2014

On April 14th over 200 school girls aged between 16 and 18 were abducted from a boarding school in Nigeria by an armed militant group known as Boko Haram. They have since threatened to sell the girls into slavery or forced marriages. 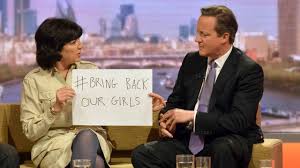 Boko Haram translates as ‘Western education is a sin’. They claim to be fighting for an ‘Islamic state’, but unsurprising 99% of Nigeria’s Muslims are not interested.

Since January over 1500 people have been killed in clashes between Nigerian security forces and the Islamist armed groups.

The response of Nigeria’s President Goodluck Jonathon has been pathetic, with no idea of what to do or where to look, the only people arrested so far have been families of the kidnapped girls who protested when the President’s wife was in town!

The world has rushed to declare support with hashtags and selfies for the 200 girls who face being sold into slavery for £250. But in Sub Saharan Africa such kidnappings are the norm with over 9000 children being abducted every year to become ‘child soldiers, slaves, prostitutes or child brides’.

Human Rights watch said this week ‘we can safely assume the abducted girls have been raped by their captors, if not worse.’

A military expedition by Britain and America to rescue the girls won’t stop such a trade especially once the media loses interest.

Nigeria’s obscene poverty is a fertile cesspit feeding the likes of Boko Haram.

With state sanctioned murder, torture and corruption endemic, last year in Nigeria’s own equivalent of Guantanamo, 950 detainees met their death through a combination of starvation and execution without trials.

According to Amnesty both ‘Boko Haram’ and the Nigerian Government have committed acts that “may constitute war crimes and crimes against humanity.”

Nigeria may be Africa’s biggest economy with Africa’s largest oil reserves but 70% of its people live on less than £1 a day. Only two months prior to the abduction the President Goodluck fired the Central Bank Governor because he was investigating the disappearance of a whopping $20 billion of oil revenues in 18 months, suspected of being funnelled by the country’s leaders into offshore accounts.

Meanwhile the Americans and British claim their special forces with expertise in counter insurgency can help Nigeria. I’m not sure our repeated failures in Afghanistan, Iraq or Northern Ireland should count as expertise.

Britain sent in its special forces into Nigeria only two years ago, to rescue two hostages, the result was two dead hostages.

In Libya when its people rose up against Gadaffi, the Brits sent our ‘Dads Army’ version of the Special Forces to Benghazi in an attempt to make contact with the rebels, embarrassingly the whole unit being taken hostage by Libyan farmers!

I hope for the sake of the families that they do find the girls and it doesn’t end in a bloodbath.

But I fear we are sleep-walking into a new war on terror and I can imagine the African ‘Bin Laden wannabes’ popping open the proverbial non-alcoholic champagne on being told that the Americans and British are coming.

Up until now Boko Haram have relied on religious bile and rotten corruption to act as recruitment fodder, but now they will turn their dirty local war into a global holy war with the arrival of the ‘infidels’.

Sadly we just keep repeating the same old mistakes, propping up corrupt regimes for their oil whilst re-opening the ‘Gates of Hell’.