ACCUSED OF RAPE-SHOULD THERE BE ANONYMITY?

Following the acquittal of Coronation Street actor Michael Le Vell on child rape charges, the debate on whether anonymity should be granted to an accused (unless  convicted) has reignited once again. 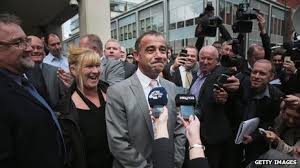 For over two years the Corrie actor was convicted in the court of public opinion long before he had a chance to prove his innocence. His life was ripped apart by the false allegations and whilst the alleged victim was granted anonymity, Le Vell was denied the same right.

Over the years I have seen in the courts how sexual violence devastates lives. Rape is an abhorrent crime which means most decent minded people demand that perpetrators are brought to justice.

But innocent until proven guilty should mean exactly that. For most men acquitted of such crimes there will never be a

‘Tabloid’ front page declaring their innocence yet details of the false horrific allegations will remain visible for ever with just a few clicks on Google.

Unlike celebrity footballers or soap stars these men do not have a PR machine to rebuild their lives and the stigma of bogus accusations will follow them forever.

I have never understood why those who advocate so passionately for rape victims are so unwilling to accept that a man falsely accused of rape can also be a victim.

ACCUSED OF RAPE- WHAT DO CAMPAIGN GROUPS SAY OF ANONYMITY

Advocates for Rape victims have long believed that anonymity for the accused would stop more women coming forward, yet the majority of those raped already know their attackers as partners, family members, or work colleagues.

Of estimated 80,000 rapes which take place in the UK, 85% lack the confidence to report such crimes but nobody has seriously tried to find out why.

I suspect many women may not come forward because the naming of their attacker will reveal their own identity and subject them to further stigma and abuse in the community or workplace.

Campaigners who attack anonymity for those accused of rape as running counter to the principle of ‘open justice’ in our courts fail to mention that the alleged victim is already anonymous and that trials take place every day where young people (not considered adults) accused of rape are protected with anonymity.

So ‘open justice’ in fact isn’t an issue.

ACCUSED OF RAPE- BUT WHAT ABOUT THE GUILTY?

This is not about protecting the guilty rapist but the innocent accused.

Can you imagine what it would feel like if you or your partner, father or brother was falsely accused of rape or child abuse?

When I said I have seen lives destroyed this applied not only to victims of rape but to those falsely accused of rape and subsequently acquitted- yet are forced to move home or jobs, attacked physically or verbally on the street with their family  ripped apart.

Despite what some campaigners claim there is actually a high degree of success in our courts with a 62% conviction rate, that is down to police officers and prosecutors who work extremely hard to incarcerate rapists.

It doesn’t help when some campaigners perpetuate the myth that rape in our courts is treated in the same way as it was 20 years ago. It simply isn’t true, a whole series of checks and balances exist to protect the complainer.

The Crown Office who usually bear the brunt of criticism have revolutionised the treatment of such cases with the creation of a Sexual Crimes Unit.

Prior to trial, defence lawyers will have to submit applications to the court to justify the type of questions they wish to ask. In one case the fact that a complainer had made false allegations of rape previously was not considered a relevant question to be asked in court.

But in the end just because someone makes an accusation does not make it true. We rely on an adversarial system of law, the presumption of innocence and no one has been able to suggest a better system.

In the last few months the names of Stuart Hall and Jimmy Saville have been used to argue against anonymity, but for decades these animals actually used their public profile to commit crimes openly with the protection of the authorities.
99% of the rape cases which reach our courts are not like those of Stuart Hall.

Rape is the one crime that even convicted killers feel morally superior to, which means that those found guilty of rape or child abuse will face a living hell in prison.

May be that is part of the price they should pay for their crimes, but does that really mean we need to name, shame and destroy the lives of the innocent?

Our ‘civilised’ system of justice is not dictated to by the demands for vengeance against those accused of rape but by the need for evidence to convict the guilty.