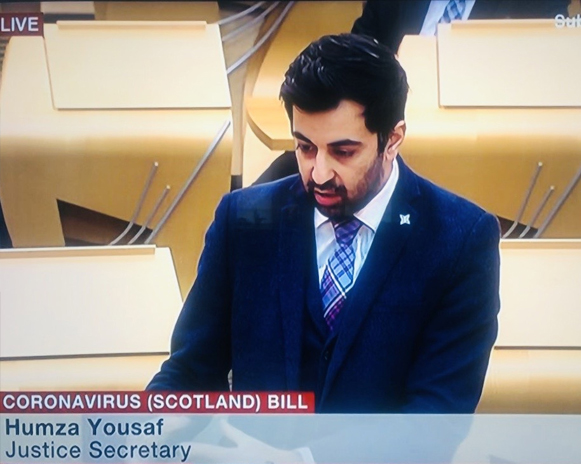 The attempt to abolish jury trials one week after ‘Lockdown’ was seen as an attack on a system of justice which has stood the test of time for over 800 years in Scotland. Whilst drastic action is needed to save lives that should not result in greater miscarriages of justice, so I welcome that the Cabinet Secretary Humza Yousaf has listened to the robust opposition and withdrawn the section on the abolish of jury trials in the Coronavirus Bill. (for now!)

The late Lord Denning said ‘Juries are the lamp that shows freedom lives.’ So much so that during World War one and two, when this country faced the risk of invasion and was being bombed on a daily basis, jury trials were not interfered with.

Fair and impartial trials by a jury of one’s peers is a sacred right enshrined in our justice system. Under the Magna Carta in 1215, it stated a king could not imprison a freeman without being convicted by a trial of his peers, the principle which established ‘trial by jury’.

I appreciate the justice system is under huge pressure, and there are valid concerns about the backlogs of serious trials such as murder and rape, however more delays would have been likely under the present proposals.

It is an extremely dangerous and regressive step that in the most serious of criminal trials, if a witness is unable to attend because of ‘coronavirus’, the judge will be able to rely on hearsay evidence without the benefit of that evidence being tested in cross examination. (as proposed in the Bill)

We were told the measures for abolition of juries had the support of Victim Support Scotland, but I am one of the only defence solicitors in Scotland who has represented families of murder victims as well as those accused of serious crimes, I know how important it is for families to see justice done. Most would rather wait for trials than be absent from such trials.

The opposition from the whole Scottish Criminal Bar, both advocates and solicitors was unprecedented. Many know that they will not be able to adequately prepare and represent clients. Our clients presumed innocent would no longer have the right to a fair trial with the necessary checks and balances had the measures been rushed through.

The idea that Judges who are predominantly male, white and upper middleclass having spent many years on the bench would be able to put aside their prejudices on the accused/complainer is exactly why we need juries.

Fifteen men and women are randomly selected for trials in rapes or murder which could result in a life sentence because it was far too important a judgement for a single judge. What had changed?

One of our most senior QC’s, Brian McConnachie, formerly Principal Advocate Depute one of the country’s most senior prosecutors said this week-

“ of the 35 High Court judges only 10 are female. At least 21 of them are between the ages of 60 and 70, the majority are over 50. There are no ethnic minority judges, there are more Edinburgh University graduates than anywhere else. A number of them have graduated from Oxford or Cambridge.”

Many of them (if not most) were educated at private schools. Almost all of them have lives which are steeped in the law and nothing else. Many of them have been advocate deputes. What is being suggested is that these are the people who should have the power to determine the facts which may condemn an accused to life imprisonment.

By comparison we have juries made up of every age, colour, creed and most importantly life experience. Day in and day judges tell juries, they are there to decide the facts because the decision is too important to be left to lawyers. One virus, it seems, will kill 1000s and obliterate (I suspect for ever) solemn procedure in this country. If this legislation is passed neither the government nor anyone complicit in its passing, should be forgiven by the people of this country.”

The Scottish Criminal Bar Association which represents all our Defence Counsel, many of whom have been senior prosecutors were as robust in their views :-

“The SCBA believes that these draconian measures seeking to bring about seismic changes to our system of justice are premature, disproportionate and ill-advised. They are at best a knee-jerk reaction to an as yet unquantified problem instigated by panic or at worst, something far more sinister.

“For the Scottish Government to attempt to introduce them within one week of ‘lockdown’ is extremely concerning, especially when, to our knowledge, no such similar measures are being suggested or proposed down South or, indeed, elsewhere.”

John Mulholland, President of the Law Society of Scotland, said:

“We respect the fact that the public health threat posed by Covid-19 has presented government with an unprecedented challenge. However, it should not limit our responsibility for ensuring proper scrutiny of measures proposed and an understanding of the impact they may have. Juries have been an important principle of the Scottish Criminal Justice system for hundreds of years. To remove this provision for the most serious of crimes would be a significant step and have major implications. We fully appreciate the desire to avoid any backlog in cases which might interfere with the proper administration of justice. However, we have not reached that point and so there is not sufficient justification to warrant trials without jury for serious criminal offences. We believe the case for taking such an extraordinary measure has not been made.”

We heard that the proposed measures would stop the ‘indefinite detention’ of those on remand, but the bill actually proposed raising the time limit of 110 days to 293 days. Just weigh that up as an innocent man or woman being on remand for 20 months.

Many have asked what is the alternative, but at the start of this pandemic, we have already been agreeing extensions of time-limits in our courts for some three months on a case by case basis, why not continue that process?

It is recognized by my colleagues that there will need to be an extension to the custody time limits in unforeseen and exceptional times.

To clear the backlog of cases it has been suggested that in a move similar to that of the National Health Service, recently retired judges could be brought back and those close to retirement asked to continue whilst more temporary High Court judges could be appointed.

As for court space, there are plenty courts which have been decommissioned and could be set up as High Courts with much additional space required for Jury trials. Our Sheriff Courts have seen a reduction in business by 90% and they could also be utilized to conduct High Court Trials.

Furthermore there is no reason why going forward, new types of court facilities could not be built to ensure social distancing, not just for the jurors but also for court practioners.

There are also real questions over the perception of separation of powers and many are disturbed that both the Lord President and Lord Advocate have such power to bring such proposals to the Government without the legal profession having had the opportunity to consult. The proposals were described by some as sinister and a back-door route for the legal establishment to get rid of juries.

The Scottish Government sees itself as left of centre, a beacon for human rights and justice, which begged the question as to why they were doing something which the UK Government have not dared to do in England and Wales, or any other jurisdiction with juries.
Indeed on the 30th anniversary of the introduction of the Poll Tax to Scotland it was a sad day that UK Minister Michael Gove asked the Scottish Government whether it was wise to take this position on Jury Trials.

These dangerous ‘knee jerk’ proposals would have delivered summary justice on the cheap for the most serious crimes prosecuted in our courts.

The Government argued it would protect jurors from Coronavirus what then about our elderly judges, witnesses, lawyers, court staff and police officers who were required to attend court with no hand santisers, masks or visible infection control.

‘Legislate at haste, repent at leisure’ came to mind when reading section 11 at Part 5 of the Bill which was silent on the matter of appeal. I do not know whether this is an error or deliberate, but this omission showed the dangers of trying to rush through such laws. It would had made it nigh impossible to appeal any case as a miscarriage of justice.

The reality of our courts is that they are not set up to use technology to conduct trial via video-link, or remotely. Any of us who have tried to arrange remote evidence taking appreciates the difficulties involved and the need to preserve integrity of evidence as well as the trial. These are the alternatives that should seriously looked at rather than a ‘short cut.’

Juries have been the jewel in the crown of our legal system because they are not afraid of scrutinising the process to which they are contributing. They reflect society and use their combined experience of the world to judge the facts. Would you prefer to stand trial before them or a white male (and sometimes female) upper middle-class judge?

To abolish juries would severe the link between the people and our justice system. It would dilute the principle that justice is delivered irrespective of education, wealth or status.

There was no opportunity for proper analysis, debate or taking on the views of all those who work within the criminal justice system, but despite this within 24 hours the whole of the legal profession, the Law Society of Scotland, the Faculty of Advocates and all our Bar Associations mobilised to defend the right to jury trial. Politicians across the political divide are to be commended for their robust and non-partisan response to the Coronavirus Bill.

Before anyone thinks that this is about lawyers being ‘ambulance chasers’ and worrying about their own pocket, it would have been a much easier option for us to allow trials without juries to go ahead for us to earn our fees.

I am proud that vast majority of my colleagues were united in robustly defending our justice system and successfully argued that the abolition of juries was a step too far, however it is imperative that we present credible alternatives to the abolition of juries to the Cabinet Secretary of Justice, before the matter is brought back to Parliament as a stand alone bill on the 21st April.